ADAM allows for the daily recording of absentees using any number of customisable absentee reasons. Typically, the absentee reasons should be as broad as possible to save you from having to create a new reason every time there is a new excuse to stay away from school. As most school secretaries will agree, parents and pupils can be very inventive!

Absentee Reasons allow us to categorise the pupil’s absence from school. While it is tempting to create very specific reasons, you are advised to create wide-ranging reasons since this will simplify the reporting aspects later. Many school adopt the following - or similar - approach: 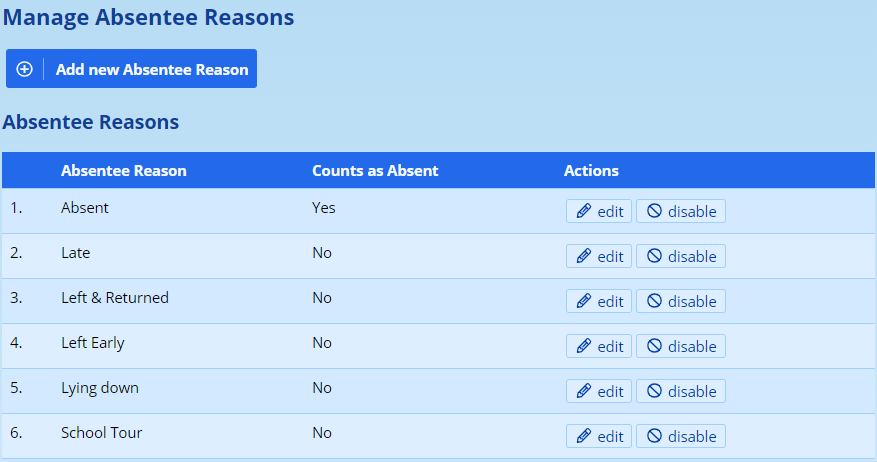 To add a new absentee reason, click on the link at the top of the page Add new Absentee Reason. You can also choose to edit an existing reason by clicking on the edit link next to the reason.

In this screen you can give a name for the absentee reason (or change it, if you are editing an existing reason). The second option will tell ADAM whether this reason should count as absent.

Be aware that changing the name of the absentee reason - specifically where such a change has a difference in meaning - that past records that have been recorded with this reason will still be shown against this reason, even with its new meaning.

If a disabled absentee reason is enabled again, it becomes available for chosing once again.

When recording absentees by class, ADAM normally marks all pupils as “present” and teachers much then specifically mark pupils who are absent as such. This system works well for most scenarios where a register teacher is guaranteed of seeing all the pupils in the class at once and is thus able to easily determine whether a pupil is absent or present.

The default behaviour, when doing a class’s absentees, is for ADAM to show all pupils as “present”:

A teacher must now mark pupils who are absent as such.

This can lead to problems, however. Consider the scenario where a morning meeting happens during the registration period. The registration teacher would open the class and, seeing that a pupil was not there, mark them as absent. However, the other teacher running the morning meeting would see that the pupil is there and mark them as present. In this instance, if the registration teacher saved their records second, the absent record would be the last one saved and the pupil would be marked as absent for the day.

A teacher could select “Unknown” from the list above and this would avoid this problem. Where a pupil is marked as “Unknown”, ADAM will not update the absentee record meaning that the conflicting information above could be avoided.

Dealing with unaccounted for pupils

In the above scenario, two teachers added conflicting information and the person who saved their absentee records last was the record that remained.

To avoid this and to force more accountability on teachers when taking absentees, ADAM can default this decision to “Unknown”. If a pupil is marked as “Unknown”, ADAM does not make any attempt to save the absentee record. Such pupils will appear on the “Unaccounted for” list of the daily absentee report.

There are a number of ways in which absentees can be recorded, depending on how your school works.

Navigate to the Pupils tab and, under the Absentee Administration, click on the option Add Absentee Records (individually).

Type in the name of the pupil and click on the Next button.

The following screen is shown:

Choose the date “From” and “To” (if the pupil has been off for multiple days). Both dates will start off showing the current date.

Please note that if you wish to record a single day’s absence in advance of their absence (for example, you receive a letter from the parents to excuse the child from school at the end of the week), you will need to change the “Date To” field to in order to reflect a date that is either the same or after the “Date From”. Otherwise, not absentee record will be recorded.

Choose an absentee type (see Absentee Reasons for more information). If you wish to enter a note to explain the absence, you may do so in the “Notes” block.

Once saved, the new absentee record should appear in the log and summary at the bottom of the page.

If you add a date by accident, you simply need to enter in the erroneous date again, as if you were about to repeat the error, and then simply click on Clear absenteeism. Any absentees for the dates selected in the date range will be removed.

One can either select a specific subject and class - useful for schools that perform registration during lesson 1, for example - or you can click on the option immediately under the heading which will take you to select one of the classes belonging to the “Default Subject”.

Once you have selected your class, confirm that you wish to enter absentees for today’s date (you can change it if you wish).

You will then see a list of pupils in that class. All pupils are assumed present unless otherwise indicated. 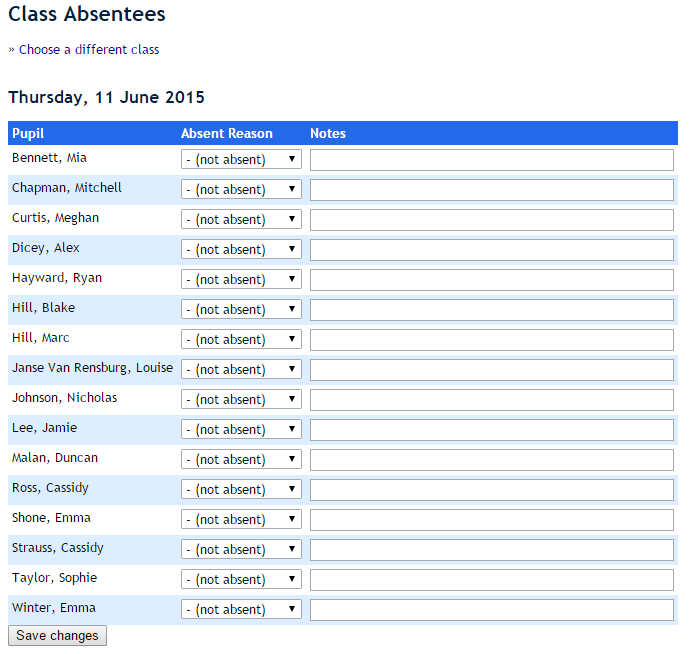 Once you have selected the reason for the absent pupils and recorded it, you should click on the Save changes button at the bottom of the screen. Any notes will also be recorded.

Bulk absentees allows you to enter absentees for a group of pupils for an extended date range.

Choose the group of pupils that you wish to enter the absentee records for and then you will see a list of the pupils in that class. The pupils are all ticked by default but you can untick any if you need to.

At the bottom of the list are the same fields as when recording individual absentees. Please note, however, that undoing bulk absentees must be done individually. Please use the feature carefully!

Absentee alerts are a great way to alert staff about which pupils they teach are absent for the day. Using this feature, ADAM can email each staff member and tell them which pupils - of the ones that they teach - will be absent today. If there are no pupils absent for a particular teacher, then no email will be sent to that teacher.

In addition, the Absentee Alerts can be used to alert pastoral care staff to the sudden and frequent absence of a pupil allowing them to follow up with parents.

The following screen will appear: 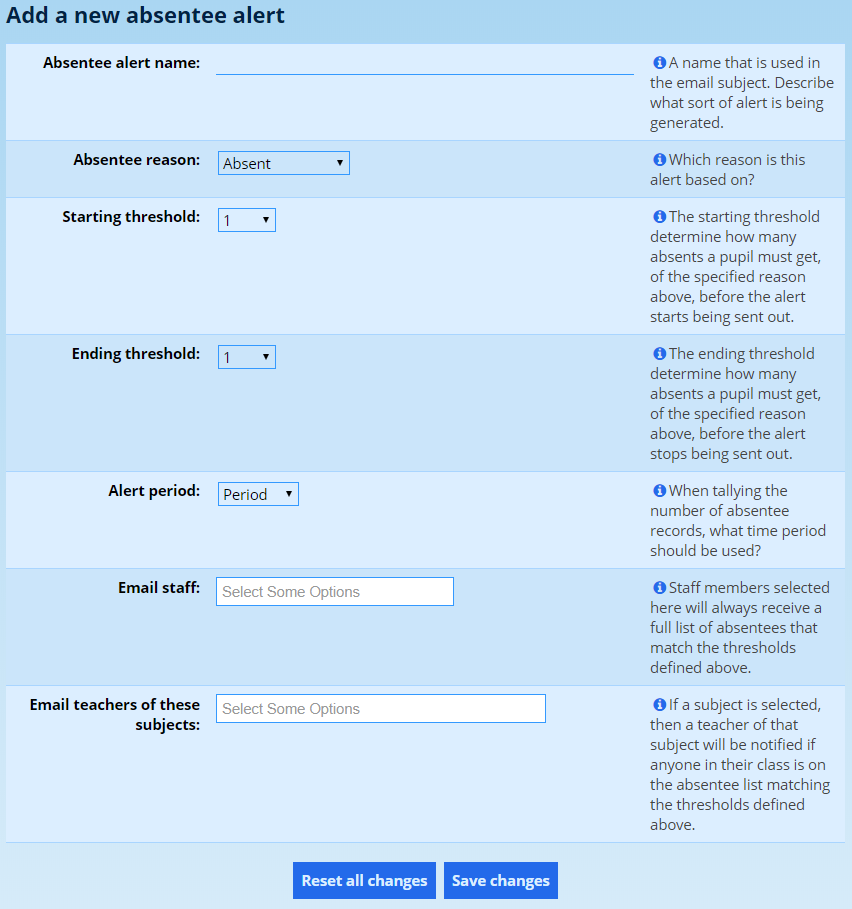 The Absentee alert name is used as a heading within the mail to indicate which type of alert this is. Examples might be:

Choose an Absentee reason that ADAM should monitor for this alert. If you were monitoring late arrivals, you would choose “Late” from the list, for example. While you can have multiple alerts set up, each monitoring a different reason, a single alert cannot monitor more than one reason.

The Start and End threshold are used to determine between which two counts the alerts should be sent. For example:

Once you’ve set up these options, click on Save Changes. Your alert is now saved.

Next to each Absentee Alert is the option to edit or disable it: 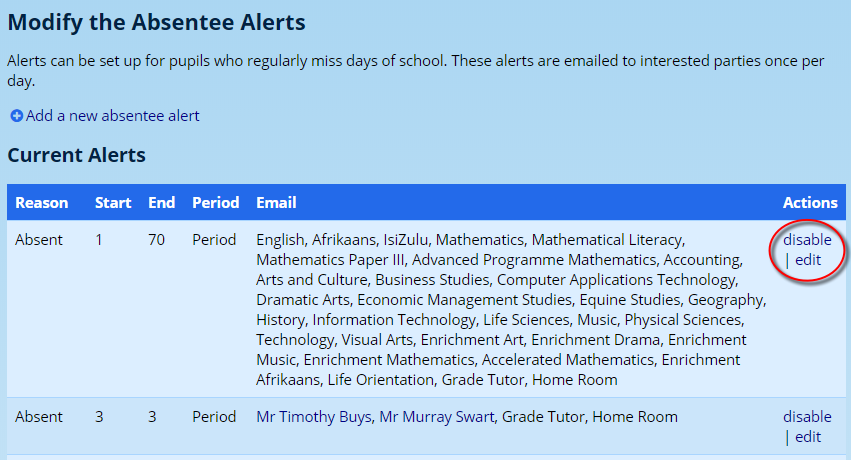 Customising when the alerts are sent

For absentee alerts to work properly, daily absentees must be completed by a certain time. Most schools will have their absentees captured by 9am. ADAM is then set to automatically send the alerts at this time. The automated sending is necessary to ensure that the alerts are sent.

To change the time, navigate to Administration → Site Administration → Edit site settings. On the Cron Settings tab within the settings, look for the Absentee alert times option and select the time of day to send the alerts.

It is possible for more than a single time to be chosen and in this instance, ADAM will send out a complete, albeit revised if applicable, list at each time selected.

Directing responses to Absentee Alerts to the Absentee Administrator

ADAM sends out the Absentee Alerts from the configured default “From” address (see Communication Settings). However, it is often useful for the person in charge of absentees to get responses from teachers who may wish to report errors or changes to the absentees (i.e. a pupil arrives late, yet was marked as absent).

To set a specific reply address, navigate to Administration → Site Administration → Edit Site Settings and look on the Cron Settings tab for the Absentee Alert Reply Address. Add in the email address of the person who should receive replies to the alerts.

A list of daily absentees can be generated by visiting Pupils → Absentees → Daily Absentee List. When opening this link, a number of options are provided.

Change the Date to show absentees from another date if required. This should always have today’s date in by default.

The option to show enrolment information will show a list of the default classes (normally “Registration Class”, but your school may have a different default subject chosen). With each class, a count of present, absent, and unaccounted for pupils is shown.

Lastly, the option to show recording information will show which teachers recorded absentees for which classes. Note that this will not show recording detail for individuals and only for classes. Schools use this as a monitoring tool to ensure that their teachers have all completed their absentee records for the day.