A “scratch list” is often referred to as simply a class list. However, they go beyond just class lists in that you can produce a scratch list for a grade or even using a filter. You can choose a number of different field and output mechanisms when producing a scratch list.

There are a number of different ways to start off producing a scratch list, depending on what information you want and how you want the lists grouped.

These can be produced by class, by subject, by grade, by age group, by filter or simply choosing everyone in the school.

To generate these lists, navigate to the appropriate sections:

Staff scratch lists can only be produced in one way (compared to the many available ways mentioned above for pupils). The lists are found at Staff → Lists and Labels → View staff scratch list.

It is also possible to produce scratch lists with families as the primary area of focus at Families → Lists and Labels → Family scratch list by Grade.

This is essentially no different from the pupil grade list mentioned above, except that families are listed first and in order of family surname.

Each scratch lists will have a slightly different path from the options you choose above. This manual will not attempt to describe them all! However, once you have made the choices for which subject, teacher, class, grade and so on, there are some standard options that you will be faced with at the end which bear some discussion. The options might change for pupils, alumni, families and staff, but the principles will remain the same.

Below the button which would otherwise produce and display the scratch lists to you, there are several options that you can customise.

ADAM allows you 5 different ways to display your data. These are:

In the Web browser and Excel output modes, you can choose for ADAM to include a number of blank columns. These can be used to record marks, ticks and so on (in fact, this “scratching” is why the lists are called what they are). If you don’t want any blank columns, you can change this to “No extra columns”. You can have a maximum of 20 columns. If you require more, you will have to take your list into Excel for manipulation there.

In the screen shot above, you will notice that there is the heading Pupil Information. Some of the fields are ticked and will be ticked when you first get to this screen. If you need any additional information to appear on your list, you can simply tick the field.

If you are using the pivot table, discussed later, then you should choose the different fields that you want to summarise your information by.

Additionally, if you select a list of pupils that involves currently registered pupils (i.e. not admissions lists or alumni), then there are additional options right at the bottom of the screen:

For some schools, this is turned on by default, for others it isn’t. In the image above, the option is not ticked and therefore is not turned on.

Here you can choose whether ADAM should show information about subject registrations for the pupils in the list. For example, you chould choose to show a list of pupils with their Mathematics teachers by:

Your final set of options should look like this:

Other common uses are to see which second languages a pupil is registered for. We could change the settings to include both Afrikaans and IsiZulu:

Where a pupil is registered for one of the subjects (say “Afrikaans”) their class details (we’ve chosen “Class Description” above) will appear in the “Afrikaans” column. The Zulu column for that pupil would be empty. The opposite would be true for pupils who take Zulu and not Afrikaans.

In order to work through the pivot tables, we will make use of an example to illustrate the functionality. We need to know the number of learners in each grade, broken up be age and gender.

ADAM will show the following on your screen (obviously your numbers will be different!):

Notice that the fields we’ve selected are displayed along the top of the table. If you select many of them, they may appear down the left column.

For example, if I drag the “Grade Text” field into the row space, ADAM will summarise the information by Grade, adding each grade on a different row:

Now, lets break up each grade into Male and Female columns by dragging the “Gender” field into the column space:

If we drag “Age Group” down into the column space, next to Gender, note what happens: 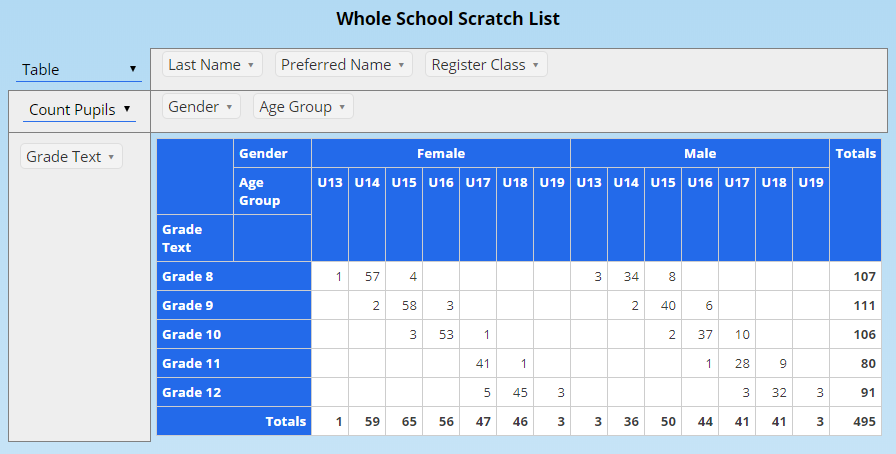 You can change the order of the fields within either the column space or the row space. Note what happens if the “Age Group” field is dragged to before “Gender”:

The Scratch List fields are used widley across ADAM to show information about pupils, staff and families. However, it may be desirable to limit the information that specific teachers can see, specifically in light of the POPI Act. ADAM Allows you to restrict the fields that the groups of teachers can see. These changes will impact both the scratch lists that are generated and other areas in ADAM where the values are shown.

Note carefully that people who have the privileges to add and edit pupils, families or staff will always be able to see all the information on the respective editing screens. However, they may still be restricted from creating scratch lists with that information. 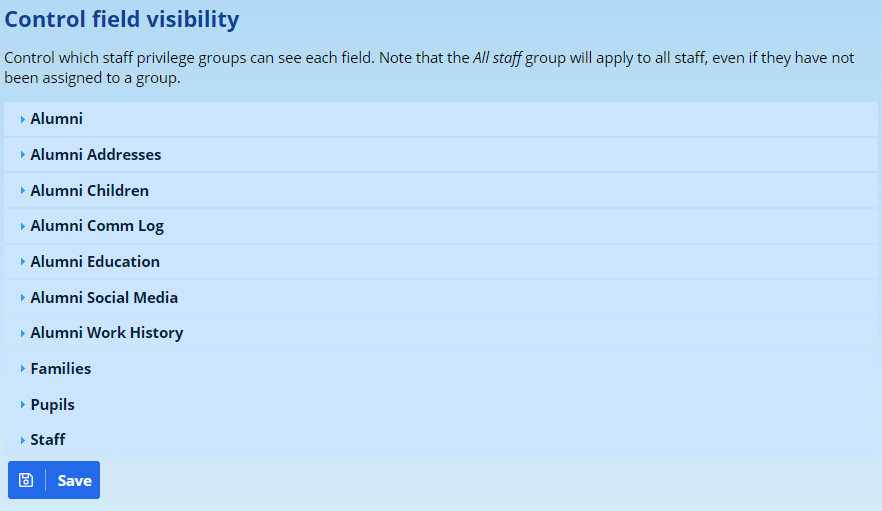 A list of data types will appear. Click on one of the headings to expose the fields that exist under each heading: 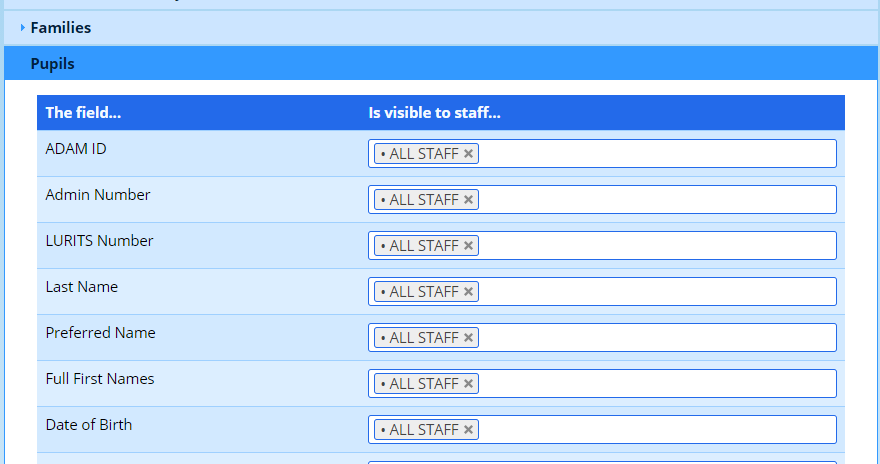 Next to each field, you can choose the groups that are able to see each group. You can select one or more groups for each field. 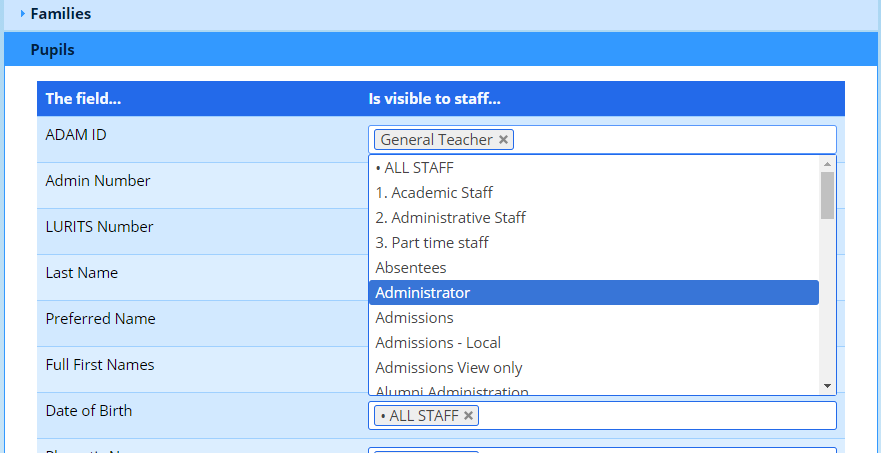 It is not necessary to select any other groups if you choose “ALL STAFF” as one of the groups.

Once you have finished customising the groups that can see each field, click on the Save button at the bottom of the screen.

An immediate consequence of this is that the scratch list fields will update to only show the fields that have been selected.